The world may not have needed yet another calculator, but I wrote this while playing with the Spirit parsing library (part of Boost), and maybe some people will find it useful. PlainCalc is a buttonless, algebraic-entry, mathematical calculator with variables and functions. To use PlainCalc, type an expression or assignment and press Return or Enter. Unlike most calculators I've seen, PlainCalc allows you to indicate multiplication by juxtaposition, e.g., you can write 2πr instead of 2*π*r. 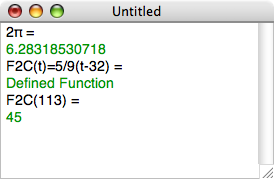 The source code for PlainCalc is available under the zlib/libPNG public license at GitHub.